As pictures are worth a thousand words I will start with images- ones which inspired my research into this unique element of Pacific Northwest ethnobotany. As you see, mats are present throughout these images, yet, at the time I was beginning my research into the cultural history here in the mid 90’s, there was very little mention of them, perhaps a caption might mention mats, perhaps even ‘cattail mats’. And yet, they showed up everywhere in the historic record- as seating, flooring, mattresses, insulation, storage, insulation on plankhouse walls, and as sheathing for the summer houses. (left; Photo by Edward Curtis; right: Painting by Paul Kane, Stark Museum of Art, Orange, Texas)

They are made from the cattail plant Typha latifolia, also called ‘ulal’ by the coast Salish, common in our wetlands, and called bulrush in other parts of the world. In my Scottish/Irish ancestry we also used them to make mats, thickly braided and sewn, as well as for baskets, as they were also used here. It’s an important plant for many things including wildlife habitat, yet shunned in most wetland restoration projects as ‘invasive’ to my chagrin (don’t get me started!).

I found cattail mats in the museums, and then began researching the tools used for making them- the long wooden cattail mat needles, the highly carved cattail mat creasers. This was the mid-90’s, did we even have google then? If so I wasn’t using it yet, and I’m not sure what I would have found, this information is so obscure and even now, incorrect. Instead I went to the books and museums, and eventually to the people who are still making them. 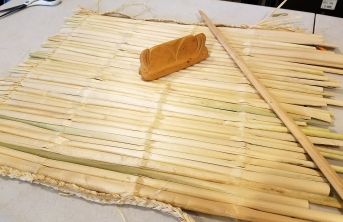 It was a three year process to make my first mat, figuring out how and when to harvest the cattail leaves (‘after everyone else is done using them’), how to dry them and store them to avoid mold, deciding what to make my first fiber cordage from, how to make a wooden mat needle, and which is the best wood, how to use a creaser, how to sew it without tearing the leaves, how to properly bind them, and eventually how to use them. I was gifted with knowledge from ancestors in photos, and finally the edge-binding techniques directly from Fran James (Lummi) who, along with her son Bill James, made cattail mats for the Burke Museum, which were also teachers for me.

These are primarily sewn mats, not twined or plaited. This is a technique unique to Cascadia region (although I believe some of the Great Lakes tribes may have also sewn cattail mats, I have not studied that yet). The photo on the left is of a Stillaguamish woman on Camano Island sewing a cattail mat with her long wooden mat needle, creaser nearby, with cattail leaves drying in the sun (Harlan Smith, 1900). I call her one of my teachers. On that note, I never refer to myself as self-taught, as I am humbled by the knowledge that has been gifted to me by people who have gone before but left their traces, and those who continue to share through writing, stories and personal connections.

I learned that tule (too- lee) mats made from hardstem bulrush (Schoenoplectus acutus) of the Plateau region are also sewn, in much the same manner. I wondered at the reason for sewing, rather than twining,  and only recently learned while working with the Klamath Tribe who used three types of rush mats for their housing- sewn, twined, and bundled- that a primary reason for using 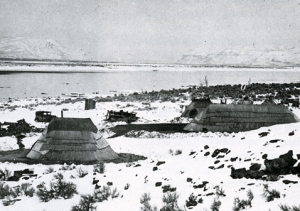 sewn mats on the exterior of a house, rather than twined or plaited, is that it sheds rain easily. Further I’ve been told that the tule mats swelled with water, as well, to further seal out the rain. The historic photo on the left shows tule mat-houses along the Columbia River, in winter a cold and windy place, and still in use after the introduction of wood stoves and cars evident in the photo, testament to how effective these mats are. The ones used for seating and mattresses were often doubled-walled for added thickness. I’ve seen some fine examples of these, most recently at Karshner Museum in Puyallup, where I consulted on designing an in-depth program for school classes which includes each student making cattail mats, using cattail leaves I supply each year as part of this program.

I have been able to share my experiences and this knowledge back into tribal communities for many years now, where it belongs. The photo, left, is of a workshop on cattails at Northwest Indian College- Traditional Plants Program, making small mats. Years after one of these workshops a Snoqualmie tribal elder shared with me that this experience brought back memories of her grandmother, who lived

in a tiny house along the shores of Lake Samammish, with her walls still insulated by cattail mats. I have learned that these hands-on experiences often trigger memory, and certainly embeds it. Cattail and tule mats continue to be used in some tribal communities, primarily for ceremonial uses.

I also offer cattail mat kits to schools, museums and educators, which I developed after many years of going into the schools to teach it myself. I’ve even made a few models for education kits used in parks and museums over the years, in particular in conjunction with a model of a Salish plank wall, like this one at the Foss Waterway Museum in Tacoma which shows the profile of Salish plank wall, insulated with a cattail mat, an ingenious and effective indigenous construction technique.

This photo shows a student at Bastyr University on her finished cattail mat as part of her research project for our ‘Ethnobotany’ and ‘Northwest Herbs’ class, which she plans to use for her morning stretches.

In the past few years I’ve expanded my work with cattails to include making and teaching about twined and plaited baskets, rush hats, and bags, in the tradition of my Irish/Scottish ancestors. It is an amazing, renewable material, and I hope I cross paths with you one day to share knowledge and experience.